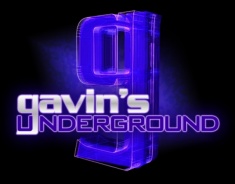 As media advances, so do the forms, and comic books are finding themselves in a strange period of adapting their material to both the internet age while still catering to those who wish to have a physical copy. Putting themselves at a bit of a crossroads as to what to do from here. Fortunately for us, there are some locals experimenting with ways to make it easier to read comics.

Case in point: Banana Panic has become one of the first local comics to embrace itself into the digital format that some publications are going to. Giving the crisp art style a home not just in physical print, but online and in phone application form. I got a chance to chat with creator Chris Hoffman about the comic and his other projects, plus his thoughts on local and national comics.

Gavin: Hello Chris, first off, tell us a bit about yourself.

Chris: I live with my wife Annaliesa and sons Lukas and Seth in beautiful scenic Herriman, Utah. I have an extensive collection of comics and love the art form. I’m an alumni of Westminster College in Salt Lake City, Utah where I graduated with a B.A. in Communication in 2008. I’m currently attending Westminster College pursuing a masters degree in Professional Communication. I’m also an employee of Westminster College where I’m the Multimedia Content Developer for the Bachelor of Business Administration, a new project-based, adult degree completion program. In addition to drawing I also enjoy building websites, writing, playing guitar, photography, playing video games, DJing and remixing music, and making YouTube videos.

Gavin: What were some of your favorite comics growing up, and are there any specific comic artists who influenced your work?

Chris: When I was really young I loved Spider-Man, X-Men, and Ghost Rider. Of the big two, I’ve always been a bigger fan of Marvel than DC. Then in high school I was a huge fan of the Image comics like Spawn and Shadowhawk. I’m really inspired by Rumiko Takahashi, Ikkou Sahara, Ben Dunn, Yuji Shiozaki, Mike Allred, and Bruce Timm.

Gavin: You once worked and the old Comics Utah. What was your time like spent there while it was still in business?

Chris: I worked at Comics Utah in the early nineties when comic fans liked their heroes with big shoulder pads, even bigger guns, and thousands of pouches on their belts. I met most of my best friends while working at Comics Utah. The store was a welcoming place where people were invited to hang out. Some folks of course took this to the extreme and stayed all day. Most of the new comics were out of plastic bags so customers could check them out. I also overheard more than my share of cross-dimensional arguments like “A Star Destroyer could totally take out the Enterprise.” It was kind of like living on the internet. During my tenure, the comics market had a financial bubble burst similar to the Dot Com bust of the 2000s. Speculators started buying and selling issues of Spider-Man like stocks. They would buy several issues of the same comic at a low price then sell all of them when the price went up. Unfortunately this caused several big problems. Selling the several of the same issue would flood the market, tanking the price. Then everyone with a printing press started a comic book company thinking they would make a fortune, flooding the market with more comics. Ultraverse, Valiant, and Majestic Entertainment among others. Mainstream comics started making special hologram covers, chromium covers, covers with holograms, all of which were bought by speculators hoping to cash in on the different cover’s artificial scarcity. One day everyone woke up and realized the comics values were greatly inflated and the bottom fell out. Sound familiar?

Gavin: At the moment you’re seeking out your Masters at Westminster. How is that program going for you?

Chris: Really, well, I’m about 25% done and should graduate with the class of 2013. With two kids it’s hard for me to take more than one class a semester, which is a double-edged sword. I get to really concentrate on the subject at hand but it’ll take me longer to graduate. I’m currently in a writing for new media class that is giving me a lot of ideas about how to tell stories in different ways.

Gavin: Where did the idea come about to start drawing your own comic?

Chris: In early 2006 an artist friend of mine named Darren Calvert drew a picture of a monkey with a gun in it’s hand and I thought it was hilarious. I wrote a quick nine page comic book script starring a secret-agent spy monkey blowing up an evil-genius’ base and promptly I forgot about it. In the meantime I collected a small library of How To Draw Manga books by Graphic-Sha Publishing. One day my friend, and co-writer of many projects, Josh noticed my stockpile of how to draw manga books and asked if I had ever even drawn anything manga style. It occurred to me that I had not. I’ve been taking drawing classes and buying books for years but aside from drawing an occasional Dungeons & Dragons character, I’ve never drawn an entire coherent story. I remembered my hastily penned monkey-spy script and got started. I’m lucky to know so many creative people that help me with everything. Banana Panic is also my opportunity to make fun of comic book clichés, like Wolverine’s perpetually mysterious past.

Gavin: Did you decide to go with traditional drawing styles or computer drawn, and why?

Chris: I use a hybrid approach. First, I draw all of the pages in pencil then scan all of the ages into Adobe Photoshop. I export those pages into Smith Micro’s Manga Studio then use it with a Wacom tablet to digitally ink the pages. Then I go back to Photoshop to do the shading and lettering. I’m glad digital art programs have evolved to where they are. Before I started using Manga Studio, the inking phase is where my artwork would fall apart. Inking digitally is much more forgiving and has an undo button.

Gavin: How did the idea for Banana Panic come around as the first comic to draw?

Chris: I was watching G4 television’s coverage of the San Diego ComicCon when I saw them interviewing an editor at Marvel Comics. He explained that one of the most important skills a comic artist can get is visual storytelling. He gave the example of Spider-Man swinging along the New York skyline. Then Spidey swings past a pizza parlor where two people are talking. Then the story moves to these two people, etc. It inspired me to see if I could do a good job telling a story visually.

Gavin: When you finally put it out, what was the reaction like from people?

Chris: Most of the reaction was “You drew this? Really?” Most of my friends and co-workers knew I liked comics but had no idea I could string together a whole book. All of the feedback has been really positive and I’ve had strangers say they are looking forward to the second issue, which is out now by the way.

Gavin: You’re one of the few artists around to offer it in the form of an iPhone app. Why did you choose to go that way with it?

Chris: Comic books, like much of old media, are trying to find their place in a world ruled by iPhones, Kindles, and netbooks. Mainstream publishers have been trying experiment with electronic-publishing formats by shoveling the old comics format onto new devices. I took the approach of keeping the electronic medium in mind as I created the comic. In the future I want to take advantage of the medium by adding interactive elements that allow the reader to experience the comic however they want. For example: Make the comic have parts you can click on for more information, or read the comic in a non-linear fashion where a reader might see the end of the story first and work backwards like the movie “Memento.” All print mediums are facing the same issues like the rising costs of distribution due to fuel prices, pressures to be more green and use less paper, and less advertising revenue. Some comic books are topping out at close to five dollars an issue for a twenty page comic. Five dollars will get you into a matinee movie which is two hours of entertainment verses the maybe ten minuets the average reader will get out of a comic. Also, working with a digital medium allows me to offer my artwork directly to consumers without a publisher, the same dynamic is what is helping to kill the music publishing industry. It’s the new frontier of comics and it’s fun for me to be on the bleeding edge. Didn’t hurt that my good friend Phil owns a company called Touchopia.com that programs iPhone apps.

Gavin: What kind of release schedule will you have for the comic at this point?

Chris: It’s a one man show at the moment so I’ll be really happy if I can get two of three issues out a year.

Gavin: Going a bit local, what’s your take on the Utah comics scene, both good and bad?

Chris: Utahans are big fans of comics and support six stores in the valley. The other self-publishers that I’ve met, like Derek Hunter and Dave Chisholm, have been really cool. The bad thing is even with all the local support for comics, we can’t get a decent comics-based convention here.

Gavin: Who are some of the artists and writers you read and would recommend?

Gavin: More national, what are your thoughts on the comics industry today?

Chris: The release of the successful X-Men, Spider-Man, Iron Man and Batman movies along with the TV show Heroes, have brought back tons of old fans and hooked many new ones. This bleeding over into the mainstream has meant that comic companies have had to raise the quality of stories across the board. Marvel with their Secret Invasion and Dark Reign and DC with the Blackest Night and Battle For The Cowl story arcs, have really gone way beyond the familiar comic stereotypes of previous years. We’re also seeing a lot of crossover comics like District-X and X-Factor that seem to be “CSI: Marvel Universe.” On the other hand things like Marvel’s “Motion Comics” for iPhone are just silly.

Gavin: If you had to make a top five, what are your most favorite comics currently out?

Gavin: Being how you’re a fan of Manga, what would you say is the appeal of it compared to American comics?

Chris: Manga has a different way of telling stories. Most western stories adhere to a three-act structure: Setup, Confrontation, Resolution. In contrast, Japanese Manga tells stories in more of a spiral shape. A story will begin with a character or event then move to another one and another visiting each as it spirals to the end, possibly before any resolution is reached. For many Manga readers, the journey of the story is more important than the ending. It’s refreshing to read stories without the familiar western framework.

Gavin: What can we expect from you the rest of the year and going into next?

Gavin: Aside the obvious, is there anything you’d like to plug or promote?