How is getting a big-name MBA like the housing crisis? 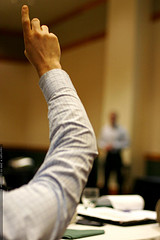 I recently attended an admissions presentation for a top ten school’s MBA program (got to keep an eye on the competition.) This school was pushing the info session hard on the radio, on the internet and I even heard the ad several times on Pandora. I wanted to see exactly what a really high end school offers to their prospective students in order to get them over the tuition sticker shock. What I found surprised and saddened me at the same time.

The presentation was held at a nice hotel with tasty snacks. I arrived a little late and had to take a seat towards the back, trying to stay out of sight for fear of being asked why I was interested in an MBA from this school. “No reason, just found some extra money in my couch cushions and thought I’d get a degree from one of the most expensive schools in the country.”

The presenter started with beautiful pictures of the campus and a bit about their history then had a few testimonials from graduates. Since I’m involved in a little bit of instructional design, I was really interested in what they were going to say about their curriculum and if the school did anything to verify the learning of their students.

Unfortunately, the presenter only had one slide where they mentioned their faculty Nobel Laureates and a handful of slides mentioned some of the general subjects covered by the classes. They told us “We have some students who are perfectionists and want to get A’s in every class and we have others who are there to learn and don’t care about grades as long as they are not on academic probation.” Which, according to their website is a 2.5 to 3.0 GPA. The rest of the presentation focused nothing but the school’s network.

The presenter said “Let’s face it, when you go back to business school what you’re really buying is the network.” The school boasted 80,000ish living alumni all over the globe, any of which could be contacted at a moments notice with a click of a button. The guest speaker, a graduate of the program, also spoke at length about the network. They mentioned that several of their cohort dropped their current employer and moved to jobs on Wall Street before even finishing the program.

Then the Bob Barker “show us what this showcase is worth” slide came up and some of the more price sensitive in the audience got up, grabbed some snacks for the road and took off. Either you can get an MBA with this school or buy a Honda NSX (Acura NSX) for $160,000 Dollars (US.)

Once the Q&A session started, all of the prospective students asked questions about the return on their investment. The questions pretty much revolved around how long it would take to get their money back and more. This is where I was surprised. I must be incredibly naive, but no one asked about the curriculum. It is just taken as a given that students will get a great education just because Nobel Laureates walk around campus every once in a while.

What made me sad was later when I had a refrigerator moment and realized that this school is giving students, some of which may have skated by with minimal grades and effort, a brand name label then sent them to important Wall Street jobs by simple virtue of paying for it. I’m sure there are many hard-working capable students that graduate from this program but what the recruiter was selling is a buy-your-way-to-a-better-job in a can.

This is why the game reminds me of the housing crisis (finally getting to the point.) When credit default swaps of questionable worth were shuffled back and forth, mostly the person holding it when the house of cards came crashing down was punished for the actions of the whole system. Once some of these graduates of unverified education are running huge companies, handed to them because of “the network,” how long will it be until we’re holding the bag and bailing them out for their questionable decisions?